The XB-38 was a modification project undertaken primarily by the Vega division of Lockheed on the ninth B-17E built. Its primary purpose was testing the feasibility of liquid-cooled Allison V-1710-89 engines. It was meant as an improved version of the B-17, and a variant that could be used if the Wright R-1820 engine became scarce. Completing the modifications took less than a year, and the XB-38 made its first flight on 1943 May 19. While it showed a slightly higher top speed, after a few flights it had to be grounded due to a problem with engine manifold joints leaking exhaust. Following the fixing of this problem, testing continued until the ninth flight on 1943 June 16. During this flight, the third (right inboard) engine caught fire, and the crew was forced to bail out. The XB-38 was destroyed and the project cancelled. The gains in modification were minimal and would have been disruptive to production of existing models. Allison engines were also considered to be more badly needed for constructing fighter aircraft.[2]

Prior to the introduction of the P-51 Mustang, a B-17 escort variant called the YB-40 was introduced. This aircraft differed from the standard B-17 in that a second dorsal turret was installed between the top turret and the waist guns; and the single 0.50 in (12.7 mm) machine gun at each waist station was replaced by a pair of 0.50 in (12.7 mm) guns. In addition, the bombardier’s equipment was replaced with two 0.50 in (12.7 mm) machine guns in a ‘chin’ turret to augment the existing ‘cheek’ machine guns, and the bomb bay itself was converted to a magazine. The YB-40 would provide a heavily-gunned escort capable of accompanying the bombers all the way to the target and back. The aircraft was deemed a failure because it could not keep up with standard B-17Fs once they had dropped bombs. It was withdrawn from service after fourteen missions. (26 built: 1 XB-40 prototype, 21 YB-40 pre-production aircraft, 4 TB-40 training aircraft.)

Four B-17s were converted to serve as cargo carriers and V.I.P. transports under the designation C-108 Flying Fortress. (Many more served in the same roles under the designations CB-17 and VB-17, respectively.) The first of them, designated XC-108, was a B-17E partially stripped of military equipment and outfitted with various living accommodations. It served as a V.I.P. transport for General Douglas MacArthur. A similar conversion was made on a B-17F, which was redesignated YC-108. The third plane, designated XC-108A, was made to test the feasibility of converting obsolete bombers to cargo aircraft. B-17E 41-2595 was chosen for the conversion. Based in India, it ferried supplies over the Himalaya to the base for the B-29 Superfortress in Chengdu, China. It proved a difficult plane to maintain, due to lack of spare parts for the Cyclone engines, and was sent back to the United States, where it was based in Bangor, Maine, and flew a cargo route to Scotland until the end of the war. It was sold to a local dealer for scrap, but the airframe survived, and is currently being restored in Illinois. The final one was built under the designation XC-108B, and was used as a tanker to transport fuel from India to Chengdu.

Several B-17s were converted to long-range photographic reconnaissance aircraft, designated F-9 Flying Fortress. (The F- here stands for 'fotorecon' and must not be confused with F- for 'fighter', which was not introduced until after the war.)

The first F-9 aircraft were sixteen B-17Fs, with bombing equipment replaced by photographic equipment. Some of the defensive armament was kept. An uncertain number more were converted to a similar configuration to the F-9, but differed in minor details of their cameras, and received the designation F-9A. Some of these, along with more B-17Fs, received further camera alterations and became the F-9B. The last variant designation was the F-9C, which was given to ten B-17G, converted in a similar fashion to the previous planes. Those surviving in 1948 were at first redesignated RB-17G (R indicating 'reconnaissance').

Late in World War II, at least 25 B-17s were fitted with radio controls to be used as drones designated BQ-7 missiles, constructed under the auspices of Operation Aphrodite. Loaded with up to 20,000 lb (9,070 kg) of Torpex high explosive and enough fuel for a range of 350 mi (563 km) they were used to attack U-boat pens, V-1 missile sites, and other bomb-resistant fortifications.

The BQ-7s would be taken aloft by two volunteer crew members, who would take it up to 2,000 ft (610 m), point it toward the target, and transfer control to another B-17. They would then bail out through the open cockpit while still safely over England. The controlling B-17 would follow the BQ-7, and lock its controls into a collision course with its target, then turn around to escape.

Because remote-control hardware available at the time was insufficient for the task, Operation Aphrodite was riddled with problems. Between August 1944 and January 1945 15 BQ-7 were launched against Germany, none ever hit its target, and several crew were killed in various parachuting accidents. One bomber left a 100 ft (30 m) crater in British soil and another circled an English city out of control. It was cancelled in early 1945.

The U.S. Navy received 48 B-17's towards the end of World War II, renamed PB-1. Post-war, the Navy acquired 31 B-17G's. Renamed PB-1W, these aircraft were fitted with AN/APS-20 radar and used to develop Airborne Early Warning equipment and procedures. They were the precursors of today's Airborne Warning & Control (AWACS) aircraft. These were later replaced by Lockheed WV-2's. 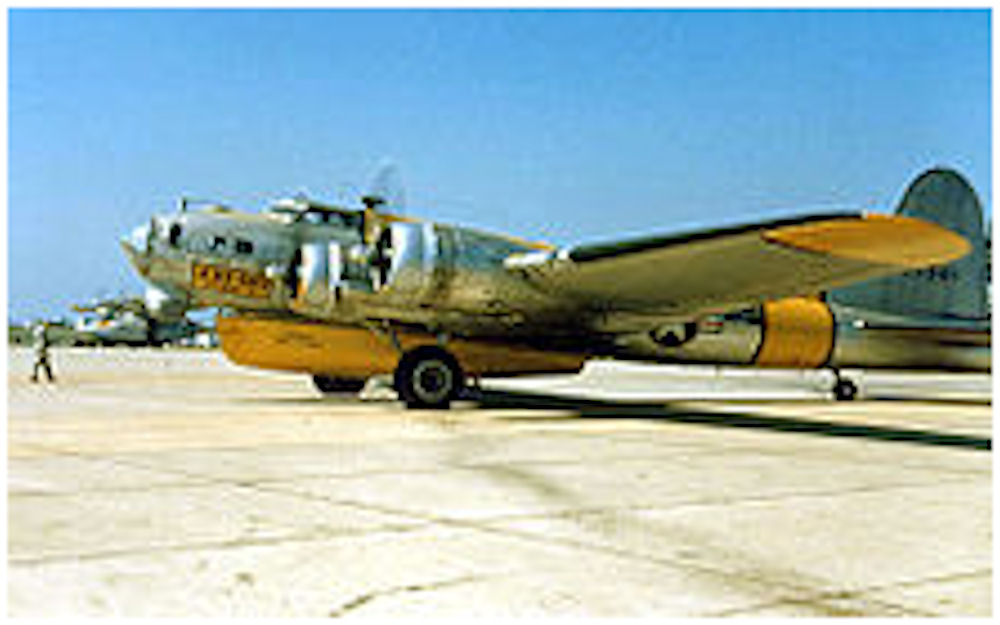 From 1943 to 1948, as part of Dumbo missions, 12 B-17G's were converted to B-17H's equipped with an airborne lifeboat and ASV radar for USAAF air-sea rescue duties. The US Coast Guard flew 17 similar aircraft as PB-1G's.