The de Havilland DH 82 Tiger Moth is a 1930s biplane designed by Geoffrey de Havilland and was operated by the Royal Air Force (RAF) and others as a primary trainer. The Tiger Moth responds well to control input, and is fairly easy to fly for a tail dragger. Its big "parachute" wings are very forgiving, and it stall as slow as 25 knots with power. Its stall and spin characteristics are benign. It has some adverse yaw, and so requires rudder input during turns.

As the Tiger Moth has no electrical system, it must be started by hand. This needs to be done with care to prevent being struck by the propeller which would result in serious injury. Being a tail-dragging biplane, taxiing also requires care. The pilot cannot see directly ahead, the lower wing can hit obstructions, and it is susceptible to gusts of wind on its inclined, large, upper wing.

The take off is then uneventful, and it has a reasonable rate of climb. However, full power should not be maintained for more than a minute or so to avoid damaging the engine.

The Tiger Moth's biplane design makes it strong, and it is fully aerobatic. But it only has ailerons on its bottom wing, which makes its rate of roll relatively slow for a biplane. Most maneuvers are started at about 90 to 110 knots, and it has a Velocity Never Exceeded (VNE) of 140 knots. It is important to lock the automatic slats (leading edge flaps) during aerobatic maneuvers.

"Wheel" landings are straight forward, as the plane is pushed on to the runway at a moderate speed with just the front wheels on the ground, and then the tail is held up until the speed reduces. The open cockpit allows pilots to stick their heads over the side to see the runway. As the aircraft is a tail dragger, it is essential to land it straight with no sideways movement to avoid ground loops.

Dual controls are fitted and are interconnected between the cockpits. Solo flying must be carried out in the rear cockpit. The front control column may be removed for solo flying or when carrying passengers.

Longitudinal trimming is affected by spring loading the elevators. A lever is located on the left side of both cockpits.

Auto slots are fitted to the top wings and will automatically deploy at low speed. There is a locking lever located on the right hand side of the rear cockpit (the top of which may be obscured by the GPS). Click on the lever to pull it back which will lock the slots and prevent them from opening. You should lock the slots when taxiing or attempting aerobatics.

A throttle lever is mounted on the left hand side of each cockpit. Pull back to fully close the throttle, push forward to open the throttle. In addition, the rear cockpit has a mixture lever (red knob). Fully back = full rich. Simple instruments to display airspeed, engine revolution, oil pressure, altitude and turn and slip are provided in both cockpits. A simple wind driven airspeed gauge is located on the forward left wing strut (note, airspeed is displayed in MPH). 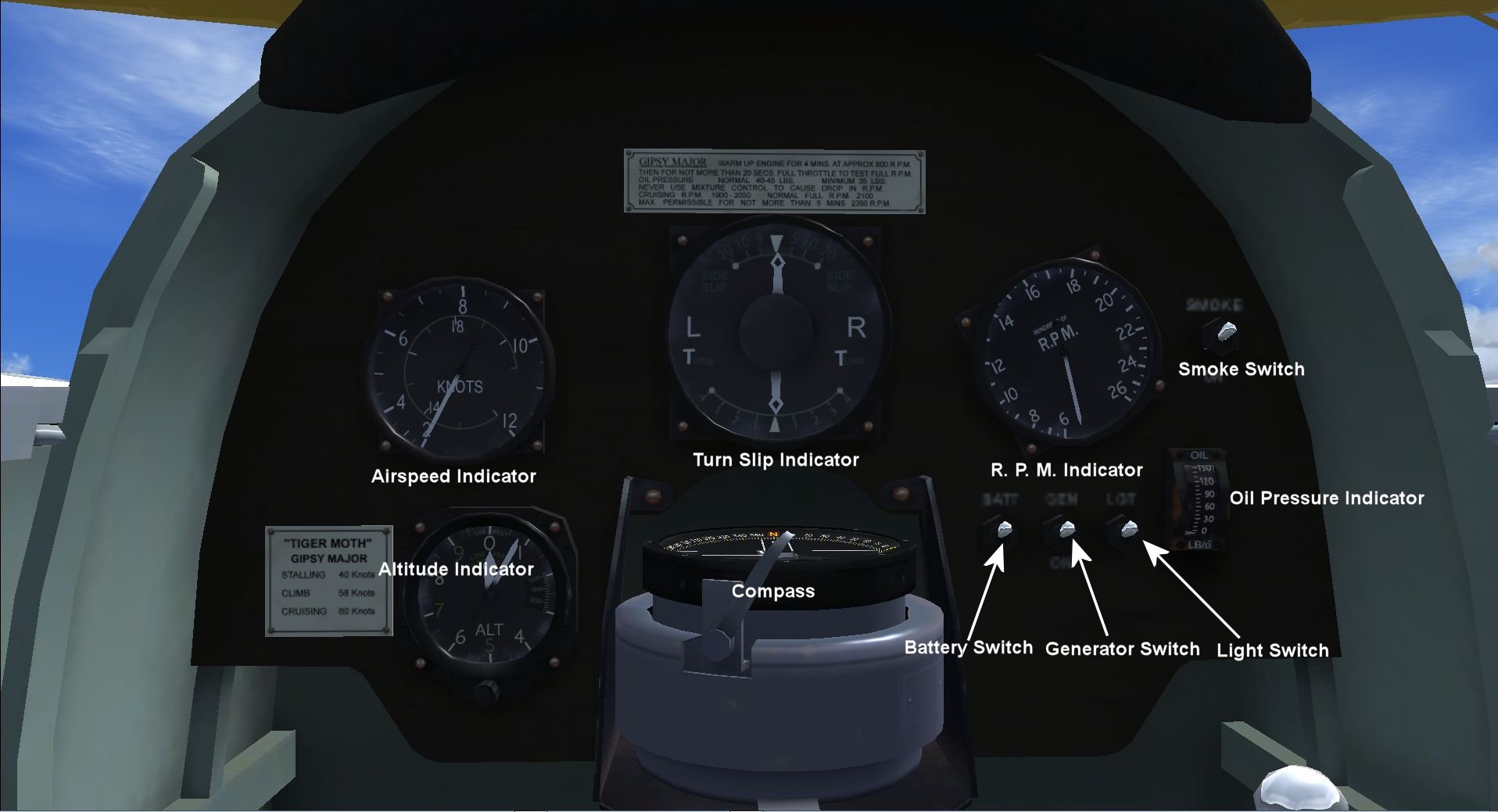 A compass is also included. This features a locking lever to prevent accidentally turning the heading dial.

Additional equipment has been added to the rear cockpit to reflect the modern aircraft. Bendix/King Air KY196A comms and KT70 transponder are located between the pilot’s legs. Battery and generator controls are located on the panel to provide power for the radios.

A smoke switch will turn the smoker on and both cockpits feature independently switchable lights although as no landing, strobe or nav lights are fitted to the aircraft you should not try flying at night.

A storage compartment is located behind the cockpit.

(This procedure is for flight simulation only)

The magnetos are located on the exterior of the aircraft on the left hand side below the windows. There are two duplicated sets, one for each cockpit.

Stalling will occur around 35 knots. To recover from a stall push the

Ensure auto slots are locked before spinning. To enter the spin from level

flight close the throttle. As the airspeed slows try to maintain your altitude.

As the airspeed approaches 35 knots push the rudder in the direction of the spin (left turning spins seem to work much better than right turning, I don't know why, they just do) and pull back the control stick. Hold until established in the spin. To restore control apply opposite rudder.

Ensure auto slots are locked before attempting any aerobatics

Typical entry speeds are as follows:

mph) which will yield a descent rate of 500 fpm

For gliding without the engine use 58 knots (66 mph)

On downwind ensure you have enough fuel, mixture fully rich and auto

You cannot use the mixture lever to stop the engine.

These notes provide some tips on how to fly this Tiger.

- The prop rotates opposite to most aircraft. i.e. anti clockwise from the

pilot’s viewpoint. You will therefore need to apply left rudder to maintain

a straight line for takeoff.

- Windmill start. If the prop stops spinning in flight go into a dive. Ensure

magnetos are on and fuel is on. At about 110 knots the prop will start

spinning again and the engine should restart. Pull out of the dive before

you become a pancake.

- There are no flaps to slow you down on approach. Side slipping will

otherwise you may arrive too fast.