Details of the Chain Home Radar Campaign and its History

If you are a current active B-17 Pilot or have completed our Hop List, you may fly our Chain Home Radar System as a C-47 or Fighter Pilot

Chain Home was the code name for the ring of coastal Early Warning radar stations built by the British before and during the Second World War. The system otherwise known as AMES Type 1 (Air Ministry Experimental Station) consisted of radar fixed on top of a radio tower mast, called a 'station' to provide long-range detection of aircraft. This system had shortcomings in not being able to detect aircraft at lower altitudes and thus was used in conjunction with the Chain Home Low system, or AMES Type 2 which could detect aircraft flying at minimum altitude level of 500 ft.

The Chain Home system was fairly primitive, since ? in order to be battle-ready ? it had been rushed into production by Sir Robert Watson-Watt's Air Ministry research station n 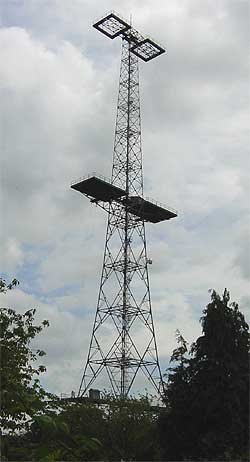 ear Bawdsey. Watson-Watt, a pragmatic engineer, believed that "third-best" would do if "second-best" would not be available in time and "best" never available at all. Chain Home certainly suffered from glitches and errors in reporting.

It was in many ways technically inferior to German radar developments, but the better German technology came at a cost. The simpler Chain Home stations provided comprehensive coverage by the start of the Battle of Britain, whereas the Germans had only commissioned around 8 of their Freya stations by this time. Although simple, Chain Home could determine distance and direction of incoming aircraft formations. The method was called Radio Direction Finding (RDF), later called "radar" (RAdio Direction And Ranging) in the U.S. Most stations were also able to measure the angle of elevation of the formation which, together with the range, gave the height; local geography prevented some stations from measuring elevation. Although not originally a design goal, the operators became very adept at estimating the size of detected formations from the shape of the displayed returns.

Chain Home looked nothing like later radar equipment. The antenna did not rotate: the transmitting array was formed of fixed wires strung between 110 m (360 ft)-high metal towers which sent out a "floodlight" beam of radio energy about 100° wide.The receiving array was on wooden towers about 73 m (240 ft) high, and consisted of two antennas at right angles to each other. The receiving antennas were directional, so the signal strength received by each depended on the angle between it and the target. An operator would manually adjust a comparator device to find what angle to the target best matched the relative strengths of the two received signals. The angle of elevation to the target was estimated by similar comparison of the signal strengths from a second pair of receiving antennas closer to the ground, which produced a different sensitivity in elevation. The time delay of the echo determined the range to the target.

The Chain Home stations were designed to operate at 20-50 MHz, the "boundary area" between high frequency and VHF bands at 30 MHz, although typical operations were at 20-30 MHz (the upper end of the HF band), or about a 12 m wavelength. 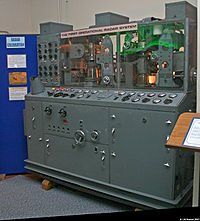 The availability of multiple operating frequencies gave some protection from jamming. The detection range was typically 120 mi (190 km; 100 nmi), but could be better. The transmitters were made by Metropolitan-Vickers and were based on the design of a short-wave transmitter at Rugby. The receivers were built by A. C. Cossor, Ltd expressly to a specification engineered by the Telecommunications Research Establishment.

The Chain Home Low stations operated at 200 MHz on the VHF band, or about a 1.5 m wavelength. Technically, they were not closely related to Chain Home, and they employed a rotating antenna.

From May to August 1939 the German Zeppelin LZ130 Graf Zeppelin II made flights along Britain's North Sea coast to investigate the 100 m-high radio towers the British had erected from Portsmouth to Scapa Flow. LZ130 performed a series of radiometric tests and took photographs. German sources report the 12 m Chain Home signals were detected and suspected to be radar; however, the chief investigator was not able to prove his suspicions, so Germany went to war uncertain of British radar defences. Other sources are said to report different results.

The Germans observed 12 m pulse signals at the western front without being able to recognize their origin and purpose. In mid-June 1940, the German Aeronautic Research Institute (DVL) set up a special group under the direction of Professor von Handel and found out that the signals originated from radar installations on the coast of the English Channel. They pinpointed the location of the 12 m CH installations that up to then had been thought to be coastal radio stations. The observation that the transmissions of the individual stations were pulse-modulated, in order to avoid mutual interference, was exploited in July 1940 to put the CH out of service for some time.

The Chain Home stations were arranged around the British coast, initially in the South and East but later the entire coastline, including the Shetland Islands. They were first tested in the Battle of Britain in 1940 when they were able to provide adequate early warning of incoming Luftwaffe raids. Their early deployment had allowed the U.K. time to develop a well-integrated communication system to direct responses to enemy formations detected.

Chain Home had many limitations. With fixed antennae facing the sea, the Observer Corps had to be employed to report aircraft movements once the coast was reached. With detection poor below 5,000 ft (1,500 m), Chain Home Low stations were placed between Chain Home stations to detect aircraft down to 2,000 ft (610 m) but only out to 35 mi (56 km) from the coast, about one third the range of Chain Home.

Calibration of the system was carried out initially using a flight of mostly civilian-flown, impressed Avro Rota autogyros flying over a known landmark, the radar then being calibrated so that the position of a target relative to the ground could be read from the position on the display CRT. The Rota was used because of its ability to maintain a relatively stationary position over the ground, the pilots learning to fly in small circles while remaining heading into the wind.

During the battle, Chain Home stations ? most notably the one at Ventnor, Isle of Wight ? were attacked several times between 12 and 18 August 1940. On one occasion a section of the radar chain in Kent, including the Dover CH, was put out of action by a lucky hit on the power grid. However, though the wooden huts housing the radar equipment were damaged, the towers survived owing to their open steel girder construction. Because the towers were untoppled and the signals soon restored, the Luftwaffe concluded the stations were too difficult to damage by bombing and left them alone for the remainder of the war. Had the Luftwaffe realised just how essential the radar stations were to British air defences, it is likely that they would have expended great effort to destroy them.

The Chain Home system was dismantled after the war, some of the original sites being used for Chain Home's replacement system, ROTOR, but some of the tall steel Chain Home radar towers remain, converted to new uses. One such 360-foot (110 m) high transmitter tower (picture below) can now be found at the BAE Systems facility at Great Baddow in Essex (2008). It originally stood at Canewdon, and is said to be the only Chain Home tower still in its original, unmodified form.

Among the tallest timber structures ever built in the United Kingdom, at least two of the wooden reception towers were still standing in 1955, at Hayscastle Cross. Unlike the transmitter tower pictured here, those at Hayscastle Cross were guyed.